See Our Locations in Central Illinois

Topflight Grain Cooperative, Inc. is a farmer-owned grain cooperative in the heartland of the USA in the middle of Illinois grain belt.
The rich soils and modern farm practices produce record yields of quality grains. 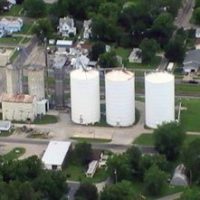 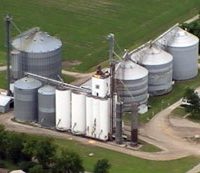 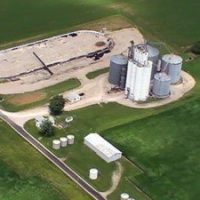 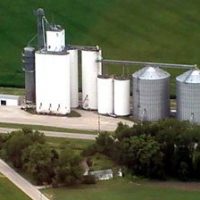 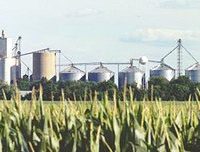 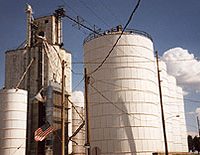 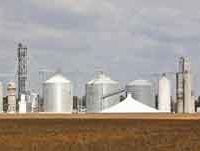 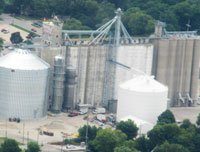 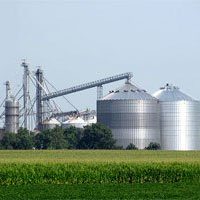 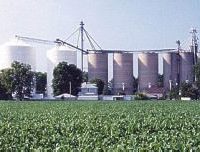 The Decatur processing plants of ADM & Tate & Lyle are just 25 miles from many of the facilities. Processing plants and ethanol plants near Pekin are just 40 miles from the Logan County elevators; Bloomington, IL processors are just 30 miles away. Gibson City processors and One Earth Energy are only 30 miles from the Seymour elevator. These markets provide many market opportunities for the quality grain grown by the 2,600 stockholders of Topflight Grain. The numerous trucking firms that serve all of Topflight’s grain elevators ensure prompt delivery to meet contract specifications.

Topflight Grain facilities at Bement, Milmine and Monticello are located directly on the Norfolk Southern rail main line, allowing shipments of grain into Decatur, movement to the Illinois River, east coast, or the export market. Through a reciprocal agreement, switching on the Illinois Central affords the opportunity for export markets via the Gulf of Mexico. The Gulf of Mexico is also accessible from the Cisco grain facility, where Topflight Grain is the co-owner of a 13.5-mile rail road that connects Cisco to the Decatur markets and the IC rail service.

Topflight Grain Cooperative, Inc. is a state-licensed grain dealer. The licenses are protected through annual audits by the State of Illinois. Year-end financial and grain audits are prepared by certified accountants and presented at the Company’s annual stockholder meeting. Topflight Grain is also a member of the Illinois Grain Insurance Corporation which insures grain owners against grain elevator failure.

Topflight Grain Cooperative, Inc. is a state-licensed grain dealer. The licenses are protected through annual audits by the State of Illinois. Year-end financial and grain audits are prepared by certified accountants and presented at the Company’s annual stockholder meeting. Topflight Grain is also a member of the Illinois Grain Insurance Corporation which insures grain owners against grain elevator failure.

Futures were choppy to start today’s trade but were in positive territory by mid-session. Month end short covering was a driver behind the rally, especially on wheat where futures were becoming technically oversold. Thoughts that Covid restrictions in China may be eased, even with rising cases, following the country’s civil unrest were supportive today. The US rail lines continue to reject offers from the unions making a strike more likely. The United States and Mexico continue to hold talks over Mexico’s stance on GMO corn imports. High prices are expected to increase world commodity production this year, easing worries over tight ending stocks in the US. We continue to see issues with Ukraine exports due to inspection delays in Turkey. Ukraine is now seeking larger vessels to help speed up movement. Trade ran out of bullish news as today’s session progressed, causing futures to recede.

Corn futures traded on both sides unchanged today as the contract was more of a follower. Importers continue to take Brazilian corn over the rest of the world with 5 million metric tons (mmt) of vessel capacity waiting to load. The attaché in Brazil is projecting 126 mmt of production in the country this year which will keep buyers interested in their offers. The price spread between the US and the global market has narrowed but not enough to draw additional demand. The USDA is underestimating EU imports this year as they have needs at 23 mmt and the USDA is at 20 mmt. There are thoughts some of this demand may be offset by using Ukraine wheat. No deliveries are expected against the December contract overnight.

Soybeans rallied today by taking support from a firm crude oil market. It is thought OPEC will cut production in their December 4th meeting which may elevate demand for biodiesel. A growing debate in the soy complex is if a larger crop in Brazil will cover losses in Argentina. It is believed this will happen, especially with mostly favorable growing conditions in Brazil. Even so the complex is short on risk premium which is needed. Soybean demand remains questionable given the uncertainty on Chinese imports. China reportedly booked from 10 to 15 cargoes of Brazil soybeans yesterday which gives the indication they need at least some coverage. China likely to resume purchases of Argentine soybeans once their Peso program gets into full swing.

Wheat futures started out strong today as short covering developed in the complex. Wheat had become technically oversold which caused short covering ahead of month end. The path of least resistance in wheat is lower though and this limited buying interest. Heavy deliveries are expected against the December contract in Chicago which also reduced buying interest as the session progressed. Global wheat production forecasts are rising, including on the Australian crop which is not as bad as initially thought. Importers continue to source much of their coverage from Russia where offers are well under the rest of the world. A factor that is starting to be more of an issue in all wheat demand is the lack of financing for importers, including Egypt, who is a leading wheat buyer.

The United States and Mexico remain at odds over Mexico’s pending ban on GMO corn imports. Mexico has stated that by 2024 it wants no imports of GMO corn. This statement has been revised by Mexico’s President in that they will still import GMO corn for feed, but not food purposes. Mexico currently imports between 26 and 28 mmt of US corn and thoughts are this change in policy will cut them to 13 or 14 mmt. The US is threatening legal action if Mexico follows through on this ban as it will go against the trade policy between the US, Mexico, and Canada.

There remains a sizable difference between current US export volumes and those that are being projected by the USDA. Corn exports at the present time are down 33% from last year compared to the 13% decline predicted. Soybean loadings are down 10.1% from the previous year while a 5% decline is being used in balance sheets. Wheat loadings are down 4% on the year, which is closer to the USDA projection for a 3% decline. These volumes indicate the USDA will likely reduce our demand projections moving forward, especially on corn and soybeans.

Another source of pressure on the market is the difference between the domestic balance sheets and those of the global market. This is especially the case on soybeans where the US stocks to use is just 5% but global production is rising. This is most evident in Brazil where the crop could be over 30% larger than last year. As a result, Brazilian exports could be up 16 million metric tons. Canada is also projecting a larger canola crop and exports, and Indonesia is projecting the same on their oilseed crop. As trade becomes more comfortable with this outlook it is showing less worry over domestic balance sheets.

Have a great evening!

This material should be construed as market commentary, merely observing economic, political and/or market conditions, and not intended to refer to any trading strategy, promotional element or quality of service provided by Topflight Grain Cooperative, Inc. Topflight Grain is not responsible for any redistribution of this material by third parties, or any trading decisions taken by persons not intended to view this material. Information contained herein was obtained from sources believed to be reliable but is not guaranteed as to its accuracy. Contact Topflight Grains designated personnel for specific trading advice to meet your trading preferences. These materials represent the opinions and viewpoints of the author, and do not necessarily reflect the viewpoints and trading strategies employed by Topflight Grain Cooperative, Inc. ... See MoreSee Less